As previously noted, the Obama and Clinton camps worked diligently to avoid associating Muslims with terrorism and “radical Islam,” by avoiding the phrase almost entirely. But by calling for complete Muslim bans, calling for mosque surveillance, and liberally employing the phrase “radical Islam” in association with Muslim-Americans, Trump has managed to change the definition of Islam, and has legitimized an Islamophobic association that, just days after the election, has many Muslim-Americans feeling unsafe.

The power of the president to define issues equates to, as Zarefksy suggests, being able to plead a cause. Particularly on the subject of Muslim-Americans, Donald Trump effectively took the status quo social definitions of the Obama/Clinton years and changed what “Muslim” and “Islam” meant for many Americans, effectively associating Muslims with terrorism. Throughout his campaign, Trump subtlety (or, at times, blatantly) advanced the case that Muslim-Americans are dangerous and radical by nature of their religion.

And while Trump’s rhetoric might seem like it would be convincing for only a small percentage of the population, now that he will officially ascend to the presidency, his language will be much more powerful and have a much more legitimizing effect. As Zarefsky puts it, “The presidential claim is offered as if it were natural and uncontroversial, rather than chosen and contestable.” Trump’s election to the presidency truly validates his definitions for many of his supporters. These definitions will become a widespread school of thought because they have been legitimized.

No longer does the president say that Muslims should be treated with respect and without fear; this president says the citizenry should be leery and suspicious of Muslims. Muslim-Americans across the country are reporting of the immediate results of Trump’s de-facto, definitional validation: 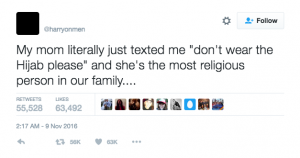 And the results won’t end there; Trump’s newly legitimized definitions are likely to pervade, at least on some level, for generations to come. Muslim-Americans have been weary of Trump’s rhetoric from the beginning, but now his words carry an unmatched validation which could cause irreparable damage to the image and treatment of newly terrorism-linked Muslims across the country.