It is no secret that social media is a “HUGE” *in Trump’s voice, factor in deciding the 2016 election. In fact, a panel at the 2016 Fortune Most Powerful Women Next Gen Summit, in San Francisco, this past week, argued that this election is marked as the “social media revolution” election. Social media platforms allow for new faces and new candidates to ramp up their surfacing stage appearance. Through platforms such as Twitter and Snapchat, candidates are not only able to gain name recognition amongst millennial but they’re also able to create a personal one on one connection with voters like never before. This utilization of social media in political campaigns has rhetorically constructed an image of authenticity around candidates having an effective and strategic appeal to voters, especially millennials. It is also important to recognize the idea that this era provides the environment for outgoing candidates to thrive while introverted candidates fall behind. This has allowed candidates, like Donald Trump and his use of Twitter for example, to clog up consumer’s feeds with a commotion of twitter rants. The panel, made up of women CEO’s from multiple companies, determined that this “loud” behavior over social media doesn’t exactly mean you’ve got the presidency in the bag. 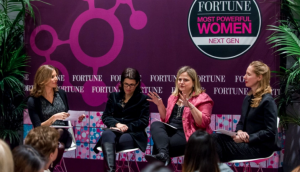 This panel and this conference gave many insights and opinions on this election but it is also important to look at the symbolic role this type of conference has in our society. For years, men have held summits discussing their financial and business successes. Here, we have powerful, influential and successful women talking about and informing people on their lives and society today and more importantly how they can improve this world that we live in. I think this is imperative to point out that despite the relatively new age of women occupying this type of corporate successful role, women have found it a priority to give back to society. These women who have pioneered and championed over a patriarchal society to occupy highly coveted corporate positions have found it critical to create a community that empowers women and focuses on making these roles the standard for all women in the future.

August 18th, 1920 was the day that women were granted the right to vote. A right that men had enjoyed one-hundred-and-thirty-one years preceding the 19th amendment since the first president, George Washington, was elected in 1789. So with women being eligible to vote for twenty-four of the most recent presidential election cycles, what is their role in presidential voting today? Women haven’t taken women’s suffrage for granted and we have outnumbered men in voter turnout since the election in 1980 and the gender gap has continued to grow.

I think a mix of factors is attributed to women’s greater voter turnout and they all are directly linked to their role in the 21st century. First off women have become increasingly depended on public services like childcare, healthcare, and food stamps. It has also become more likely for women to be the primary caregivers so they must deal with government programming and services such as schools. Therefore they are directly affected by the government’s public services on a daily basis. Another reason, that reflects more of women’s evolved role in society today is simply that women are more empowered today as we are in the era of post-feminism. Prior to 1980, it was more taboo for women to be involved in politics because it didn’t fit the strict confines of a feminine gender characterization.

With more and more empowered women showing up over the years to the polls on Election Day, it begs the question what this 2016 election numbers will look like. Knowing this, it seems like a no-brainer that Hillary Clinton, the first woman presidential candidate nominee of a major political party, would sweep the polls. Especially as her opponent represents the face of White patriarchy and misogyny. So I do have to say, the odds are looking good for her to be the first female president of the United States in 2017.

A closer look at the gender gap in presidential voting

Once again, we have Trump making headlines over the way he treats women. Many would say they aren’t surprised by his male chauvinist behavior or more so, that at this point, this behavior is almost expected. For those who want to shrug this story off as being non essential to the election, I want to argue why you might want to take a second to look and think about the implications this has for his campaign, us as U.S. citizens and in general, women’s role in the future.

Whether or not you believe that Trump’s personal views on women affect his ability to be a successful president is still a valid argument for his constituency. However, what is no longer arguable in the wake of these remarks and his apologia statements is his character. Donald Trump has quite simply proven himself to be a male chauvinist pig that finds women’s value in their appearance as sexual objects. Not only is it not arguable that he said these vulgar derogatory remarks but it is also not agreeable that his apologia statement did not affectively display remorse for what was said nor proved that he didn’t believe in what was said. In fact his apology statement did quite the opposite. It reaffirmed his belief in a society dominated by hegemonic masculinity through dismissing his comments as “locker room talk”. The sports world is widely considered a male dominated realm of society. Trumps use of sport as a scapegoat for his vulgar misogynistic behavior, only reaffirms his belief that patriarchal constructs exist as pillars of our society and furthermore, that these views are justified in the arena of sport. Trump excusing his comments as nothing but “locker room talk” suggests that although these ideas might be “politically incorrect” and taboo to admit publicly, they are still valued by men and are acceptable to be discussed behind closed doors, in a male dominated setting. Even then, his attempt to justify his comments as “locker room talk” seems to be outdated. According to the Red and Black, the University of Georgia’s student newspaper, athletes “believe that Trump’s comments are misrepresentative of themselves and the behavior in locker rooms”. The article noted that Chris Conley, former UGA football player, tweeted “The guys I know and respect don’t talk like that. They talk about girls but not like that. Period”. Another former UGA football player, Rennie Curran said, “I’ve never heard any conversation like that.” A.J. McDonald, also a football player admitted to stories being told involving women “but it wouldn’t be used to ‘down-grade a woman.” These young athletes found this comparison frustrating “that they associate that with locker rooms” and that “it makes us look bad” agreeing that the sports world is trying and has made strides away from its hegemonic past, one that Donald Trump is clearly still stuck in. 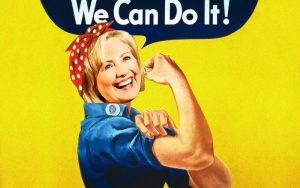 A woman’s role in the U.S. is constantly being redefined. As time passes, feminists grow in number, striving towards one goal, equality. Despite a long history of a culture deeply rooted in the ideals of hegemonic masculinity, gender equality has slowly gained momentum, to the point where it’s a very real possibility that we could have a women sitting in the oval office come January. We as a society have come so far even since 1993 when Hillary Clinton became the first lady and at that time “a feminist coming there [to the white house] was too jarring for a lot of people” says Clinton to The Rolling Stone (49). Only a few decades ago the thought of a first lady being a feminist was taboo. So that begs the question, is our country ready for a female president? Despite statisticians and pollsters attempts to call the election, the answer can only be definitively known come November 8th. So instead of trying to bog myself down in polls and the whole “who won what” debate, I decided to do some investigative journalism myself. I took to the streets to ask real, college aged women about women’s roles in regards to the gender argument and the election.

What I found is that all interviewees recognized women’s role in the 21st century as taking on a somewhat liberated role. One women, Catherine, said a women’s role was “anything… being able to fulfill you’re self dreams and goals”. I followed this answer up asking if she thinks this role is fully and equally achievable, she responded, “I think it’s achievable but at this point in time, no, I don’t think they have equal opportunity”. All the women interviewed followed a similar discourse to that of Catherine’s. They noted progress in women’s freedom and role in society however they thought that women aren’t quite equal in the eyes of society and in opportunity. It became clear, gender equality was important to these college aged women, but how much did this influence their decision on who got their vote? When asked about their main issues in the election not a single woman singled out gender equality, women’s rights or anything of the sort. Therefore, the gender issue wasn’t seen as a deciding factor but rather a compliment to those in favor of Clinton and in the case of Trump…well one optimistic interviewee explained it was something that “Trump would have to change his stance once he’s in office, if he was president he’d act more presidential” says Lucy, age 22.

It is no doubt that gender is largely at the forefront of this election especially with two candidates that virtually represent polar-opposite ends of the spectrum. I know that interviewing a dozen college aged women does not begin to try to predict how the election will turn out but it does remind us to question the power of the gender argument and to what extent it will dictate peoples decision come election day.