In a shocking turn of events, Donald J. Trump was elected President of the United States early Wednesday morning, defeating his highly favored opponent Hillary Clinton. As we all know, the vacant seat on the Supreme Court heightened the stakes in this election, and may very well have helped Trump secure the victory.

Trump said from the very beginning that he was “looking to appoint Judges very much in the mold of Justice Scalia.”  That’s a blanket statement, but Trump’s statement here rhetorically worked to appeal to traditional, conservative values. Justice Scalia was very-far right on most issues and fit the typical Republican platform, and this appeal to conservatism may very well have convinced some to vote for him. In fact, an exit poll revealed that the percentage of voters who saw the Supreme Court as the “most important factor” in the election favored Trump over Clinton, 57 to 40 percent.

Early polls suggested that only 45 percent of Republican voters were satisfied with Trump as their party’s nominee and with Clinton favored to win all along, it’s only right to assume voters were swayed by alternative factors. The nation seemed shocked upon Trump’s victory; however, the Supreme Court may offer an explanation for this historic turn of events. 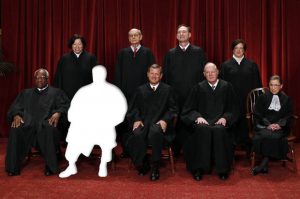 Talk amongst Republicans recently has been centered around blocking Hillary Clinton from appointing a ninth Supreme Court Justice. Is that even possible, for Republicans to shrink the Court? Turns out, it is possible, and it very well may occur.

North Carolina Senator Richard Burr recently came out with a bold promise: “If Hillary Clinton becomes president, I am going to do everything I can do to make sure four years from now, we still got an opening on the Supreme Court.” Burr is not alone in speaking out- he is the third prominent Republican to make a public statement regarding the GOP’s intention to block Clinton’s appointments. Texas Senator Ted Cruz and Arizona Senator John McCain both preceded Burr, arguing  there is a “long historical precedent for having fewer than nine justices on the supreme court.”

Three prominent Republican Senators speaking out may prove the party’s intense desire to keep the seat vacant, but how could these threats become a reality? In short, the Republican Senate is not required by the Constitution to confirm or even entertain Clinton’s nominee. Further, history underscores the possibility of this occurring, as Court vacancies have been historically common for long periods of time.

President Obama even seems to acknowledge the strong possibility of Republicans accomplishing this court blockade. “What, only Republican presidents get to nominate judges? Is that in the Constitution…?”, Obama beckoned the crowd in North Carolina, the home state of Senator Richard Burr. These three prominent Republican Senators threats are supported by historical precedence, legitimized by the Constitution, underscored by the President’s attacks, and ultimately shed light on the strong possibility of Republicans blocking the ninth Justice from being appointed. 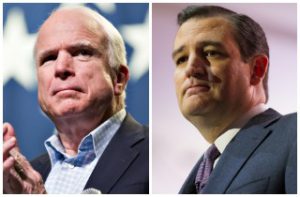 Two prominent Republicans, John McCain (left) and Ted Cruz (right), have recently stepped forward with bold statements about the Supreme Court – statements so bold, they reveal the party’s acceptance of looming defeat and the redirection of their efforts to preventing a left-leaning court.

John McCain, former GOP presidential candidate, made headlines recently with his public promise, that “Republicans will be united against any nominee put forth by Hillary Clinton, if she were to be elected President.” McCain’s statement was certainly aggressive, and seemingly threatening. However, it made one thing clear: Republicans are on the defensive, expecting defeat and are attempting to grasp onto any hope they may have of acquiring a right-leaning majority in the Court.

Ted Cruz’s recent statement about the possibility of keeping the Court’s final seat vacant was certainly less aggressive than McCain’s. However, it reinforces that the Republican party is preparing for defeat and that McCain is not merely an angry Republican (or perhaps still bitter that he lost the 2008 election). Cruz’s statements, although less blatant, further reveal the Republican party has turned their efforts away from winning the election and toward preventing a left-leaning Court on top of a Democratic President.

This recent shift in rhetoric surrounding the Supreme Court – from Trump’s Court vs. Hillary’s Court – to Republican threats to block Hillary’s nominees makes one thing very clear: the GOP’s outlook on the election is bleak. These statements reveal they have already accepted defeat and are grasping onto the one hope they have – preventing Hillary from acquiring a left-leaning Court in addition to her presidency. 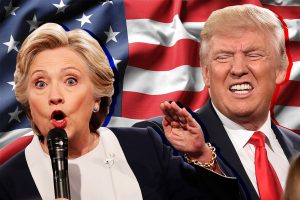 Issues of gender have seemed to creep into every aspect of this year’s election, and that certainly rang true in last night’s debate on the Supreme Court. The very first question of the night was about the future of the Court and Hillary Clinton’s gender-focused responses underscored her goal of painting a picture of Mr. Trump as anti-woman.

Hillary and “all” the Ladies

Hillary’s vision of the Supreme Court is one that she claims will represent “all of us.” However, her use of “all” was loaded with rhetorical significance and was arguably more about women than about everyone. She mentioned the importance of not overturning Roe vs. Wade and of equality in the work place, both of which are focused on women’s rights. She continued, bluntly saying, “we need a Supreme Court that will stand up on behalf of of women’s rights…”  Although she did mention other minorities, Hillary’s use of all in this case painted a picture of herself as pro-woman, and ultimately further alienated her opponent from women.

It’s all about the Angle

Hillary strategically angled her response about the Supreme Court to launch a loaded discussion about abortion and women’s rights. With a vacant seat and a state of deadlock in the Court, the election of a candidate will likely sway the court in the direction of that candidate’s political party. Hillary took full advantage of this, knowing that recent events have contributed to Trump’s anti-woman persona and that his stance on these issues would likely reinforce that persona. She pointed out that Trump’s stance on abortion and his plan to defund Planned Parenthood would deny women of benefits and of the right of choice. After reinforcing Trump’s lack of concern for women, Hillary swept in as the hero by claiming she would defend Planned Parenthood, Roe vs. Wade, and women’s right to choose.

The real kicker, however, was Hillary’s claim about Donald’s intention to punish women in regards to abortion. “We have come too far to have that turn back now,” she said,  “and indeed he said women should be punished; that there should be some form of punishment for women who obtain abortions. And I could just not be more opposed to that kind of thinking.” This statement designates her as an agent of protection for women against Trump.

Nobody likes the Bad Guy

Hillary Clinton’s strategic responses in last night’s debate certainly reinforced her goal of alienating Trump from women voters. She framed her responses, even about seemingly gender neutral issues such as the Supreme Court, to further vilify Trump in the eyes of women- the demographic he desperately needs to stay afloat in the election. 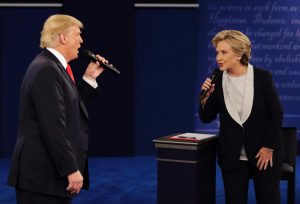 The Silence is Finally Broken

Sunday night’s presidential debate marked the long awaited discussion about the Supreme Court’s vacant ninth seat. The candidates’ answers made one thing very clear: Hilary Clinton and Donald Trump are NOT on the same page (or even in the same chapter) in terms of their visions for the Supreme Court. When prompted with a question about potential appointments, Clinton focused on experience and protection of rights while Trump pointed to Scalia-like justices with conservative tendencies. Whose argument was better?

Let’s take a look at the facts…

Clinton’s response was clearly articulated and represented the typical liberal value system (or typical liberal Supreme Court Justice) by emphasizing equality and diversity. She made herself a team player by claiming she’d “look broadly and widely” for justices who would represent the country’s diversity and she focused on the protection of (women’s) rights.

Trump’s initial response was a lot less fluffy. He answered the question directly, pointing to his list of potential appointments who would fit the mold of Judge Scalia by voting conservatively on issues that matter to Republicans, specifically in terms of abortion. This part of his answer sharply contrasts Clinton’s by casting a traditional conservative vision for the future of the Court.

A closer look at the transcript from the debate reveals how Trump strategically changed the subject from the Court to his favorite topic: money. Trump’s subject change reflects his desire to highlight his strengths and appeal to conservatives. 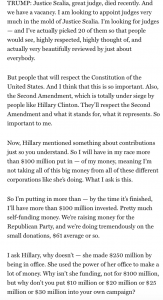 A case could be made for either – it all depends on what matters most to the listener. Hillary’s argument contained more substance, she outlined her vision for a more liberal, diverse Court in detail. Trump took more of the “if it ain’t broke, don’t fix it” approach by claiming Scalia had done a sufficient job and then strategically changed the subject to highlight his economic strength.  There are pros and cons to both strategies, but at the end of the day, voters who value liberal social policy will most likely declare Clinton the winner while conservative, economic-minded voters will probably take Trump’s side.

What you Need to Know

The Supreme Court is missing its ninth justice. Okay, but so what? It also happens to be an election year, so the stakes just got a heck of a lot higher in the fight for the White House.

Less is not More

With the death of Court Justice Antonin Scalia in February, the Supreme Court is down one player entering into a new term. This vacancy has the Court in deadlock, because there is not a ninth vote to break the 4-4 tie. 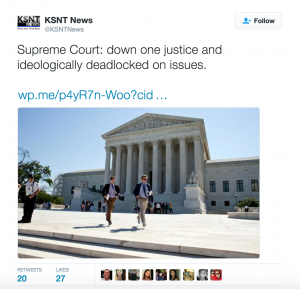 This empty seat on the Supreme Court ups the ante in the race to the White House, to say the least. Come November, our country will have a new Commander-in-Chief and subsequently, a court that leans in his or her favor.

Let’s break this down. Greg Stohr, of Bloomberg Politics, lays this out pretty clearly. 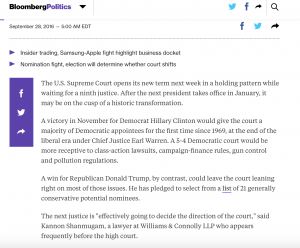 As Stohr so eloquently points out, if Hilary wins the race, the Democrats will have the majority BUT if Donald takes the cake, the Republicans will have the 5-4 majority.

Have your Cake and Eat it too

So basically, it’s Donald vs. Hillary: for the Presidency AND for the majority in court.  With the court majority, it’s looking like whoever wins the election will have his or her cake and eat it too.

It’s easy to get caught up in the drama of the election- the email scandals, tax return madness, the pant suits and the social media fat shaming – but let’s not lose sight of how important this election is. Our country is about to undergo an extreme transformation and the power is ours to elect the agent of that change.