We now know the results. Donald Trump has been elected as the next President of the United States and so many across the nation are heartbroken and afraid.

Hillary Clinton was a shining beacon for closing that gash of racial injustice within our country. For so many people she had rhetorically constructed herself as the golden warrior against the darkness of racial injustice. She was their savior. Now with the results of the election people are terrified. The terror and fear that Hillary Clinton pushed in regards to Donald Trump’s character and the lack of fighting that image on Trump’s part, has consumed so many United States citizens. They have found themselves in a rhetorically constructed “Hell”. Whether any of these policies or threats proposed by Trump actually go through, people have heard the rhetoric and are absolutely horrified of it.

People are so horrified that the day after the election results were announced there have been schools shut down, bomb threats, rallies, protests, and hundreds of acts of distaste towards the results. In CNN’s article Thousands take to the street to protest Trump win, the authors write about the overwhelming protests of thousands of US citizens in response to Trumps win. Clinton helped to construct as the anti-Christ in regards to inclusivity and diversity.

In a society that is plagued by a seemingly ever increasing division of racial tension, this divide has not skipped the Presidential election process.

Secretary Hillary Clinton and business man Donald Trump have an extremely polar opposite voting base when it comes to race.

In this election Donald Trump rhetorically serves the role of a White supremacy culture in the eyes of the American Public. Many of his most outlandish statements resemble the opinions and fearful reactive comments of a challenged culture. For the United States public, he is the symbol of Caucasian dominance and cultural intolerance. In This Race Is About Race, by Susan Milligan, she discusses how Trump is supported by several racially intolerant groups. This has sparked a whole new discussion to this election. This election turned into the idea of being racially tolerant or being intolerant of diversity. This rhetoric has shifted many votes throughout the election.

Donald Trump gives Hillary the perfect backdrop to be seen as the racially just candidate. In this election her ratings with the African American and Latino voters are extraordinary. This shows a strong level of distaste by those groups towards Trump. She is rhetorically placed into the concept of being the resistance of Caucasian supremacy.  This is important because rhetorically she is now synonymous with racial acceptance for many voters. That changed many voters opinions from this being a general election to a moral vote. This alignment by Trump rhetorically shifted the voting lense of many voters. This is most interesting because of how the association of these societally agreed upon, “negative groups” can shift the rhetorical nature of the whole argument.

Holier than thou, Hillary has pulled back all of the stops.

In Aaron Blake’s Article, Hillary Clinton essentially just called Donald Trump an unrepentant racist he discusses how Hillary Clinton has been playing a slightly different game than she has in the past. She has adopted very similar tactics to her presidential race opponent, Donald Trump. 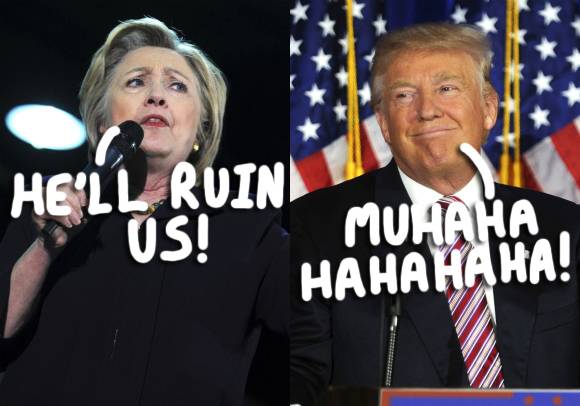 Clinton has decided to strengthen the division of the candidates in regards to race. She is now acting similar in many ways to Donald Trump by trying to convince the audience that she is with them and that Donald Trump is the enemy, and therefore, evil. She has taken the initiative to invoke a rhetorical enthymeme in the mind of the audience so that they see Donald Trump as being a racist and bigot. This is an extremely important and interesting tactic, because it creates the mentality of us and them in regards to Donald Trump. For example the Clinton campaign released a video, Hillary Clinton: ‘Trump and the Extreme Right Wing’ that creates the enthymeme that Trump must support and approve of the ‘Extreme Right Wing’ which is said to consist of a constituency based around racism.

The us and them mentality is important. It paints the picture for the audience that Trump is immoral and in many respects, evil. This then creates the enthymeme that Hillary Clinton is therefore good and racially just. It is the simple good vs bad argument. Even in its simplicity it is one of the most powerful arguments used in the political sphere. In this case it comes down to a emotional and logical based argument. Logically racism is viewed as bad in our society. If that is the case, and Trump is associated with racism, then he must be bad. If he is bad, and you support him, then that must make you bad. That argument has made huge waves throughout this election cycle for Clinton.

Throughout this whole time she is automatically considered the good character in the situation. This is assumed because of her accusation. The idea is that she couldn’t make the accusation if she was guilty of the same fault as Trump. This lets voters feel comfortable in voting for her because she is not the “evil” candidate under this premise.

Secretary Clinton, throughout her campaign, has been adept at reaching out to the afflicted racial minorities of our nation. She has done so through the use of recognition of causes and support of movements. Specifically she has been seen visiting many African American churches. This is a common tactic for the Clinton family. They have had a strong tie in this demographic area for years and years. She goes to these churches, speaks, and is seen as being racially inclusive through her promotion of things such as prison reform and economic development with a focus in helping these communities. In After Black Lives Matter dust-up, Bill and Hillary Clinton shore up support with black voters, an article on The Washington Post website, she is quoted speaking about how she wants to “boost economic development in predominantly African American communities in Baltimore and elsewhere.”

These scenes are used to frame her as a candidate who is racially just and aware. She is striving to be seen as a President who would have those minorities in mind when at the discussion table. For example, on her website, hillaryclinton.com under the Racial Justice section of the Issues page, she is seen in a photograph surrounded by a racially diverse group.

In this Presidential election, Hillary Clinton has been a major advocate of social change and racial justice. As you listen to her speeches, read about events she has attended, and scan through her policy points on her website, you notice a focus of attention on racial justice.

In many peoples minds this issue is non-existent and nothing other than just an idea for attention. On the other hand, a large proportion of United States citizens see this as a terrifying reality of the corruption and fault in our justice system and society.

As the saying goes, “the powerful write the history books”, and that is exactly what she is trying to do. Through her use of public acknowledgement, she is helping to rhetorically frame the concept of racial injustice in the United States. This framing is a powerful tactic used by many politicians. This topic is a key concept in swaying many young voters. The topic of racial injustice is something that is an increasingly more common conversational piece amongst said group. She uses this political prowess and recognition that she has gained, to give light and validity to this topic. She reaches her audience by replicating statements of division from the past, and concepts that pull from speeches of the civil rights era. In doing this, she basically confirms that there truly is a monster under our bed and it’s name is racial injustice. The voters who already believed in racial injustice are confirmed and thus strengthened in there stance, and those who were unsure now feel compelled to fight this injustice.

Secretary Clinton masterfully uses rhetorical framing tactics to validate the concept of racial injustice. She comments on and makes many statements pertaining to a broken system that is unfair and unjust. She talks of creating a greater unity amongst the citizens of the United States and makes wavering voters feel wrong for not voting in support of her unifying policy points. In acknowledging the division of the people of the United States in regards to racial justice, she is coercing the conversation of creating equality throughout our society.