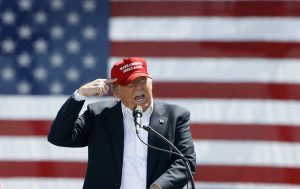 In order to mobilize voters towards a candidate or towards a movement, an emotional connection must be established. Drew Westen, in his book The Political Brain, states that a message must be pitched at a level of generality that elicits an emotional resonance for people. Often times, the term “business” gives off a stone-slated, cold emotional palet. There is a common misconception that those who do well in business often do not care for other’s emotions and feelings, but rather care more for the profit and bottom line. Though this may be partially true, Trump has had to win over the American voters’ hearts by showing how his business record will benefit America’s heartland for the greater good.

During the first debate, Clinton attacked Trump for the claim that he build his business on the backs of other people, the little people. In terms of emotional rhetoric, hearing the story Clinton described as Trump taking advantage of an architect and not paying him at the end of a hard days labor gave voters a reason to begin to doubt the integrity of the business record. We all strive for the American Dream; hearing a presidential candidate “stiff” workers in order to futher his career, business and profit strikes a chord in many voters, regardless of the fact that it is true or not.

Trump, however, does have a secret weapon that naturally appeals to voter’s emotions. And that is his daughter, Ivanka. She is living proof that his business savvy can be taught and acheived by someone, through simpler and less extravagent means. As co-executive vice president with her two brothers, Ivanka naturally elicits emotion as a strong powerful, self-sustaining business women. Her

business record itself is impressive. But she stands as a secret weapon to serve credibility to the record Donald Trump has built for himself. Her speech at the RNC, introducing her father as the Repubican nominee, gave her the credibility to stand as a pillar for his sucess. Even Hilary felt it necessary, during the 2nd debate, to give kudos to Trump for raising his kids to be someone to be proud of.