Clinton lost the election, but a USA Today poll shows that she won among millennials. 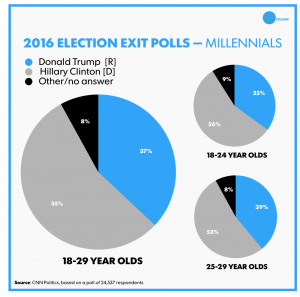 The issue is that she did not win with the same margin as Obama in 2008. According to Philly.com, Obama collected 60% versus Clinton’s 54%, which along with decreased support from minority groups, may have cost her the election.

What rhetoric did Hillary use to lose the millennial vote? Surely her support from millennial idols Beyoncé and Jay-Z helped. Also receiving support from Obama should have motivated his voters, but it didn’t. The International Business Times reports “half of young voters said they were ‘fearful,’ not ‘hopeful,’ about the future of the U.S,” which is opposite of Obama’s slogan of Hope. Coming out of the Bush presidency, millennials depended on hope from a younger platform to speak for them. Clinton did not meet these demands in the same way as an elderly, untrustworthy option for the Democratic Party. Bernie Sanders stole much of her younger voters’ support, even though he endorsed her. Third party candidates also stole many millennial votes from her.

Could Hillary have won the millennial vote with a different rhetorical approach? Millennials did not resonate her despite her attempts to seem like the selfie taking, Galifinakis fan, which may have made her seem more inauthentic than she was. While she emphasized the importance of the future of her granddaughter, she needed to focus more on the immediate future of America, millennials to better address how despite their fear, there is hope that millennial will have opportunities to survive in America.

How we voted — by age, education, race and sexual orientation