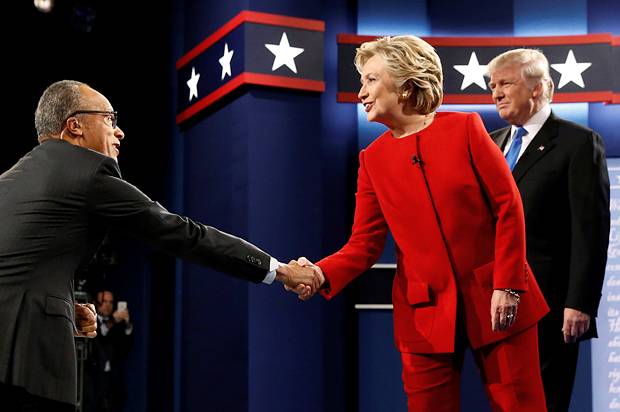 Throughout her political career, Hillary Clinton has been ridiculed and attacked for her more aggressive rhetorical style. Unlike some of her predecessors, whether they be other First Ladies, or other women of the Senate, she has chosen to take stronger and more, “masculine” stands on the topics she deems worthy of debate. This theme in her political career has stayed true, especially in her recent Presidential campaign against the Republican nominee Donald Trump.

In the first Presidential Debate of this 2016 election, the overall consensus showed that polls were tallying a higher positive response to the approaches and rhetorical strategies that Hillary took, rather than Trump’s.

As we discussed in class, there are some very simple reasons as to why Hillary came away with a higher percentage of the polls after this debate. First of all, as stated previously, Hillary is not afraid to speak her mind and fight back against anyone. This has been the double edged sword of her career, if you will, because women’s roles in society, whether in politics or not, has been to be the overall, “mother figure” or, “care-taker.” Hillary has not always fit into this traditional role, especially because she has chosen a career that is still predominately male. However, this characteristic has allowed her the chance to have a the real possibility to be first female President America has ever had.

Before the debate, Hillary was expected to take a very calm and controlled response to whatever Trump had to say in the debate. She has been accused of being abrasive and “wishy washy” due to some of her past allegiances to different causes. For this and other reasons, she was supposed to maintain a calm and even demeanor in order to counter balance Donald Trump’s extremely controversial rhetorical style. This would hopefully make her seem more relatable and therefore fill the more traditional womanly rhetorical role. Hillary in the end did take a more laid back role, in which made Trump seem more hot headed than he has been trying to come off which only enforced her claims against him. This was an overall successful strategy that she must maintain in order to clutch the candidacy later on.