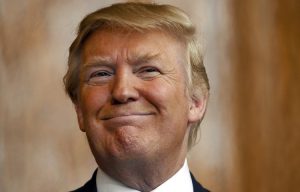 In his speech, Trump began making statements about restoring order and how he will make changes with the police, but he failed to actually say what he would do. Trump could barely finish his thought when he said, “And the police are going to be careful and they’re going to be studied and they’re going to be — but we have to restore law and order.” Although he failed to back up his statements with evidence, Trump passionately declared that he would restore law and order to America. Trump said, “What happened in Dallas, where all of those people were shot down. Absolutely, absolutely for no reason. Viciously shot down, and so many others.” He tapped into the audience’s anxiety by referencing other shootings that have happened in America, and set himself up as the candidate for change. Rhetorically, Trump shaped his message and delivered it in a way that was exciting for the audience and made them feel that if he was elected, he really would do something to change the current state of America.