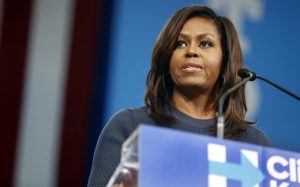 In a blistering speech given last week in New Hampshire, Michelle Obama gave the best surrogate speech the Hillary Clinton campaign has seen to date. The First Lady spoke for 25 minutes, and did not utter the name “Donald Trump” a single time. Instead, she just referred to him as “Hillary’s opponent” and let her audience fill in the blanks. Despite not using his name, Obama structured her argument to specifically pit women against Trump by shifting the entire narrative of Hillary Clinton’s campaign. For Michelle Obama this is no longer an election for change or consistency. This is an election between good and evil.

Obama alluded to the comments Trump made about sexually assaulting women and then juxtaposed them with the past successes of women in American history, saying that again it is time to “roll up our sleeves, and get to work.” She begged her audience to again become women warriors, fighting for decency and morality by voting for Clinton on November 8th. She made it clearly known that women in states like New Hampshire were the deciding vote for her husband in 2012, and further empowered her audience saying “women have all the power they need this election,” to win the election.

Obama gave her audience an outline of a picture of Donald Trump and let her audience color in damning traits like weak, degrading, and morally indecent without once using one of those terms. In doing this, took a note right out of Trump’s playbook. Obama “otherized” him by pointing out characteristics that portray him as a candidate that cannot be both for America and for women. Trump has done this countless times in the campaign talking about Muslims and other minorities that he excludes with his rhetoric. 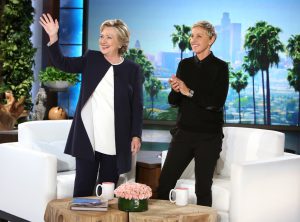 The day after Obama’s speech, Hillary Clinton appeared on The Ellen Degeneres Show supported her most effective surrogate. Her appearance confirmed what Obama said, again restructuring the argument to be Trump versus women instead of new leadership versus change. I think the implications of this partnership between Obama and Clinton are devastating for the Trump campaign. Trump is still floundering for women supporters, and without women surrogates, he is not likely to recover. It is incredibly apparent that women will decide this election, and women surrogates are more important for both campaigns now more than ever. They will be the ones that influence the most women electorate, and they will be the ones to decide this election.