What Has Been Said So Far

Although the question of who the new Supreme Court appointee will be is an immensely important issue in the upcoming election, it has received relatively little attention from the media and the candidates themselves. In the first debate, it was not brought up at all. In the second presidential debate, it was brought up but due to time constraints in the rhetorical situation of a town hall debate, not a whole lot was or could be said by either candidate. Clinton attempted to use the rhetorical strategy of identification by saying she wants people in the Supreme Court who “who understand the way the world really works, who have real-life experience.” However, she was probably identifying with too large of audience because it is highly doubtful many people want someone who does not have “real life experiences” on the supreme court. Trump on the other hand, also used the identification strategy but a little more effectively than his opponent in this case. He said he already has a list of 20 candidates he would consider, compared to Clintons 0, but more importantly he identified with audience members who have strong opinions about the 2nd amendment by saying that the right was “under siege by people like Hillary.” 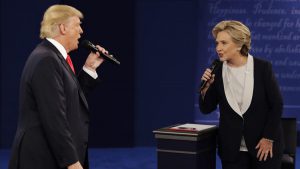 What To Expect On Wednesday

Hopefully Wednesdays debate will allow this, and other important policy issues, to be discussed in further detail while minimizing the amount of bantering between the candidates about unimportant issues. We can at least conclude that the lack of attention on the topic of the Supreme Court nomination in the previous debates will open the floor up on Wednesday night for Trump and Clinton to really get their perspectives out there. Trump was a strong supporter of Justice Scalia who was considered to have a very “strict” viewpoint on the Constitution. Trump will probably look to reinforce his position on 2nd amendment rights and will say he wants to appoint a Justice that will follow in Scalia’s footsteps. However, this will continue to negatively impact the LGBT community’s stance on Trump as Scalia was opposed to same-sex marriage. Although I think that Trump realizes the LGBT community is not necessarily his target audience, I believe he will try to downplay the fact that Scalia was against same sex marriage if it brought up. Also, he will probably name some of his considerations that support same-sex marriage, and are not as strict on the constitution as Scalia in an attempt to appeal to more undecided voters, namely heterosexuals that support same-sex marriage.

Clinton also talked about protecting rights when the question of the Supreme Court nominations was brought up in the last debate, but her argument was directed more towards protecting voting rights for minorities and lower class individuals and supporting the decision made in Roe v. Wade. While protecting these rights is very important to many people, Clinton might have made a mistake by pushing to hard left on the Supreme Court nominee. To conservatives who are not necessarily on the “Trump Train” she unintentionally reinforced one of the few reasons that they consider to be an important factor in the decision to vote for the less than ideal candidate. Some even to the point where Friday’s tape of Trump’s lude comments has become forgivable. However, polls show Hillary with a decent lead and her stance on the Supreme Court may prove to have no impact on her overall campaign. On Wednesday expect to see Clinton stick to her guns about voting rights, same-sex marriage, firearms and continue to push for a left sided Supreme Court.