Shady is as Shady Does

Now closing in on the 2016 presidential election, October has been anything but boring. With less than twenty-four hours until our future president delivers their acceptance speech, voters have been thrown for a loop with the latest October surprises. Conspiracy has risen in a statement proposed by Senior Economic Advisor, Peter Navarro of Clinton’s involvement with media oligopolies and trade with China. 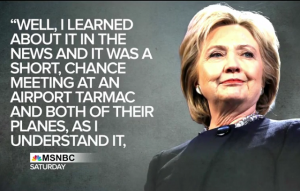 In this conspiracy Navarro explains how big media heads have been skewing the information they feed to the public to essencially fill their pockets. Evidence has suggested that, “Clinton megaphone MSNBC,were once owned by General Electric, a leader in offshoring factories to China. Now NBC has been bought by Comcast, which is specifically targeting the Chinese market – even as Comcast’s anchors and reporters at MSNBC engage in their Never Trump tactics.” Trump’s campaign has targeted trade to bring light on the situation at hand – trade with China is taking away from the United State’s economy and it’s citizens.

Your Career for Their Millions

Trump is “connecting the dots” and voters are seeing a side of the media and Hillary Clinton’s campaign that is shady at best. The statement referred to Clinton by being the candidate of the multinational ruling elite. She has earned this title since the same corporations that profit off of shipping American jobs offshore are pushing Clinton’s agenda. With this new situation people are now going to question big media heads and the Clinton campaign.

This could severely hurt Hilary’s campaign. She is already under the pressure of breaking laws and now voters may think she’s involved with even more scandals. The fact that news channels like NBC are bashing all of  Trump’s trade tactics and promoting Clinton will appear dishonest now that Navarro has linked their involvement with trade. Has Clinton and MSNBC been profiting off of America’s declining economy and rising unemployment this whole time? How do we know what the media is telling us is true? Election day is near and the final shots have been fired. 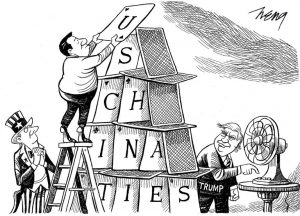