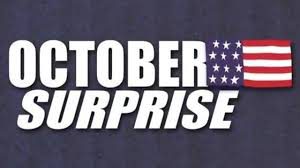 We have been hearing about emails since a year and a half ago so is this an ‘October Surprise’? Although this is ‘new’ information out, is this an effective surprise? More emails found on Anthony Weiner’s computer allegedly along with texts between him and a 15-year-old is an interesting take on the emails and there are some affects in the GOP’s favor, this is not enough.

In an article by the Washington Post, Steve Schmidt, a GOP strategist says, “It’s just really unlikely that there is an undecided bloc of voters still weighing Hillary Clinton’s emails. I think everyone made up their minds a long time ago on that subject,” and I agree.

I don’t understand why these emails, found on Anthony Weiner’s computer no less which adds to the media value of her emails, is what is used against Clinton. Many citizens are using their early voting option and have already voted. Surprises should be let out now in order to influence the most voters. Surprises held until a less than a week out from the Election Day will be used to deter voters from going to the polls at all.

The only plus to releasing a large amount of emails with a week until Election Day is the FBI can’t analyze the emails and possibly dismiss them before the election (even though they are trying their best).

USA Today included an interesting take claiming that these emails being released plays to Secretary Clinton’s benefit showing the election is not ‘rigged’ in her favor and she has had major hurdles to cross.

This tug of war between undecideds between two ‘less-than-desirable’ candidates is not a war where someone win will the undecideds over, but will end in a tie where undecideds decide not to vote at all.