One thing that both avid supporters and outspoken critics of Donald Trump can agree on is that he has a knack for saying things average politicians do not, or should not say. Supporters see this is as a good thing, saying that this effectively portrays the narrative of a trustworthy outsider giving him fresh perspective on how things should be run in Washington. Critics say this anti-politician, off-the-cuff language makes him appear incompetent and unfit for the presidency. Wherever your opinions lie on the matter, it is interesting to analyze some of these remarks especially in regard to what he has to say about women. 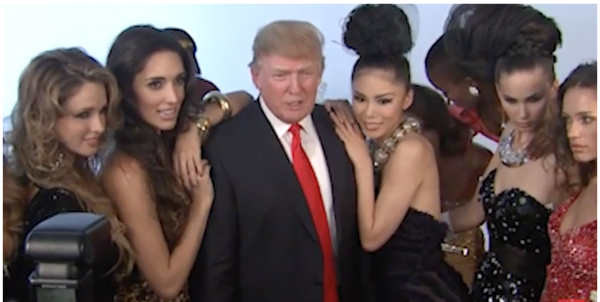 Trump has constantly been referred to as womanizing and misogynistic from the outset of his campaign, which has had a profound negative impact in the polls since women will be incredibly important in determining this election. The argument could be made that they may be the most crucial demographic in this election. Hillary Clinton has driven millions of women, both Democrat and Republican, to her side with her careful rhetoric; Trump’s less restrained rhetoric has driven women away by the masses, which is something Trump campaigners have desperately tried to rectify.

I googled the word “sexism,” and, unsurprisingly, the first thing to come up was the definition. More interestingly though, the second thing to come up was an image and an article about Trump. Maybe this was coincidence, or because the author used really great key words for search engines, but regardless, it is shocking for a presidential candidate to be so closely linked to such a huge societal problem that he be the first thing to follow the definition. In light of this, I think that this election has major implications for how sexism will be handled after the election. I do not think that either candidate will effectively be able to end sexism in one term; I don’t think anyone could. However, I do think that when women go to the polls, the candidate they vote for will reflect whether they want the issue to be dealt with proactively or reactively. 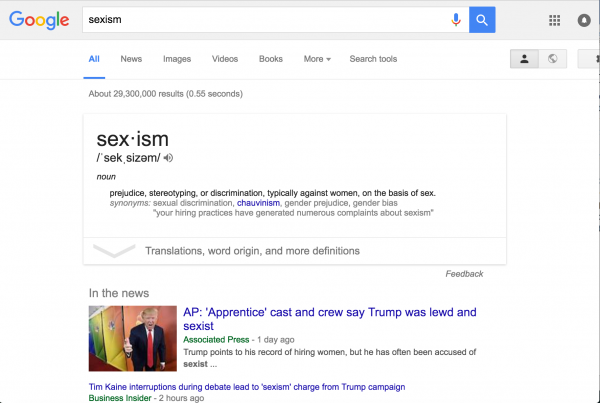 While some women are appalled by the language Trump uses, others couldn’t care less. One source reported a woman saying “He’s all-inclusive. He will offend everybody equally,” which she seemed to find endearing, which offers an interesting perspective into the mind of the demographic that will largely decide the vote. For those that do not find such qualities appealing, Trump’s staff has been working damage control, largely spear-headed by Ivanka Trump who has appeared in several ads advocating for her father’s character and his view toward women. Moving forward, I think we can expect to see many more attempts cater Trump’s rhetoric to not marginalize women.