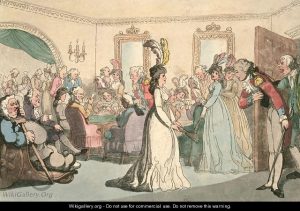 “Company at Play, plate 8 from Comforts of Bath, 1798” by Thomas Rowlandson

Free Indirect Discourse: “the way, in many narratives, that the reports of what a character says and thinks shift in pronouns, adverbs, tense, and grammatical mode, as we move — or sometimes hover — between the direct narrated reproductions of these events as they occur to the character and the indirect representation of such events by the narrator” (from Abrams, A Glossary of Literary Terms)

“Discourse that is represented, rather than directly related, to the reader . . . in which the thoughts, statements, and even dialogues engaged in by the characters are recounted to the reader” (The Bedford Glossary of Critical and Literary Terms)

Drawing upon the critical reading for today, apply at least two or three concepts to the first volume of Northanger Abbey.

Northanger Abbey. Directed by Jon Jones,  screenplay by Andrew Davies, performances by Felicity Jones, JJ Feild, and Carey Mulligan, Granada Television and ITV Productions, 2007. (2 hours). Available for free streaming with PBS Passport, as are most of the BBC adaptations. Available for rent on other platforms. 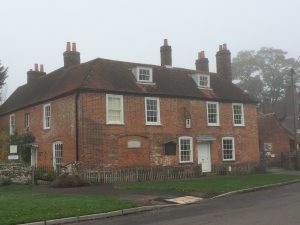 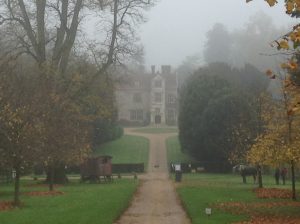 Chawton House, one of Edward Austen Knight’s homes. Now a library dedicated to the work of women’s writing, as well as a restored home and garden open to visitors.

Weekly Writing Prompts due by Thursday, the 11th: 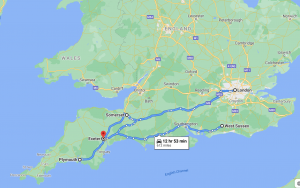 Screenshot of movement in the novel

Link to The Jane Austen House Museum and  Chawton House. A video celebrating Austen’s bicentenary in 2017.

A definition of “entailment”

A definition of “coverture”

**
Tuesday, February 16th: We will not meet today but please use the class time to finish view either a complete Sense and Sensibility adaptation, or clips from another. We’ll discuss the novel and criticism on Thursday

Sense and Sensibility (Finish the novel)
Online Austen: Mary Poovey, from “Ideological Contradictions and the Consolations of Form” [from The Proper Lady and the Woman Writer]

Instructional Break on Feb. 17th
No office hours today. Please contact me if you’d like to
set up a meeting during the week.

Pride and Prejudice (Volume I)

Weekly Writing Prompts:
1. The first sentence of Pride and Prejudice is one of the best known in British literature, but what does it actually mean and whose voice is it? “Who speaks?” here? Support your assertion with direct evidence from the text.

2. In Northanger Abbey, Henry Tilney suggests that dance can be seen as a metaphor for marriage. If that is true, what do the dancing (and non-dancing) scenes in the first volume of Pride and Prejudice suggest about the relationship between Elizabeth and Darcy?

How rich was Mr. Darcy? A BBC “More or Less” podcast:  http://www.bbc.co.uk/programmes/w3csvq3g

Pride and Prejudice. Directed by Joe Wright, screenplay by Deborah Moggach, performances by Keira Knightley and Matthew Macfayden, Focus Features, 2005. (2 hours and 9 minutes) Available on Amazon Prime to rent, Hulu, Showtime with subscription, as well on other platforms.

Pride and Prejudice : We will continue discussing Volume I  but please read the first four chapters of Volume II

Middle-Class London: where did the Gardiners live? / Ryan Hernan

Trailer for the 1940 Pride and Prejudice

Homepage, January, March,  and April and May