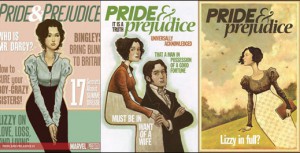 Classroom Visit with Soniah Kamal, author of Unmarriageable. I’ll make the first few chapters of the novel available to you prior to her visit. See your email for information about preparing for this visit.

There will also be an extra-credit opportunity for you to attend her evening event at Avid Bookshop. It is a question and answer gathering from 6:30 to 7:30 at Avid’s Prince Avenue location (493 Prince Avenue). As always, you can earn up to 2 points on your semester exam if you attend the event and submit a 2 paragraph description of your participation.

Claudia Johnson, “Sense and Sensibility: Opinions Too Common and Too Dangerous” (Norton)

Pride and Prejudice (Volume I)

How rich was Mr. Darcy? A BBC “More or Less” podcast:  http://www.bbc.co.uk/programmes/w3csvq3g

1st Essay Due: On the Juvenilia, Northanger Abbey or Sense and Sensibility

Pride and Prejudice and Valentine’s Day

Trailer for the 1940 Pride and Prejudice

In-Class Writing: Whose argument do you find most compelling: Alistair Duckworth’s or Susan Fraiman’s? Why? Support your assertion with specific evidence from both the essay and the text

If you find neither argument compelling, why? Support your own argument with specific evidence from the text.

Clips from Pride and Prejudice adaptations

“Darcy on Film“ [Link to two articles below]

Brian McFarlane, “Something Old, Something New: ‘Pride and Prejudice’ On Screen,” Screen Education 40 (2005): 6-14. [You’ll have to login to Galileo first if you’re accessing this off-campus. In either case, you’ll have to click your way through: “Find it @ UGA” (on the far left hand side of the screen); then click on “ProQuest Central,”  and then “Download PDF” or “Full text – PDF” to access the article. There are a lot of colorful photos in this article so make sure you get to that display.]

The Book Club Project:  You’ll be expected to have your read your book by March 5th, when you’ll meet with your group for an in-class discussion.

newredshoes. “Sif and Sensibility.” Archive of Our Own. Organization for Transformative Works. 29 Aug 2011. Web. 28 Mar 2014. <http://archiveofourown.org/works/246793> Can be downloaded as a PDF and printed; please add page numbers.

biichan. “Five Sons Mr and Mrs Bennet Never Had.” Archive of Our Own. Organization for Transformative Works. 22 July 2010. Web. 8 February 2018  <http://archiveofourown.org/works/102470/chapters/140793> Can be downloaded as a PDF and printed; please add page numbers.

Veerle Van Steenhuyse,  “”Jane Austen fan fiction and the situated fantext.” From English Text Construction 4.2 (2011): 1-11. (The article is quite long; you only need to read the first 11 pages).

Come to class with your preferred list of fanfiction groups: the options are Jane Austen (as a character), the Juvenilia or Northanger Abbey, Sense and Sensibility, Pride and Prejudice, Mansfield Park, Emma, and Persuasion: Description of the Fan Fiction Assignment

I think of Longbourn — if this is not too much of an aspiration — as being in the same tradition as Wide Sargasso Sea or Rosencrantz and Guildenstern Are Dead. It’s a book that engages with Austen’s novel in a similar way to Jean Rhys’s response to Jane Eyre and Tom Stoppard’s to Hamlet. I found something in the existing text that niggled me, that felt unresolved, and wanted to explore it further. That was the pull for me, that sense of unresolvedness* — I can’t really speculate on what it was for other writers: I’m afraid I don’t know the other fictions around Austen’s work terribly well at all.

The unresolvedness for me was to do with being a lifelong fan of Austen’s work, but knowing that recent ancestors of mine had been in service. I loved her work, but I didn’t quite belong in it — and I felt the need to explore that further. (NPR Interview with Jo Baker)