Dr. Jeni Vaitsman studies health politics and polocies. Similarly, Dr. Romulo Paes de Sousa focuses on epidemiology, “specializing in health inequalities and social policy evaluation” (2). As the former Vice Minister in the Ministry for Social Development and the Fight Against Hunger (MDS) in the Government of Brazil, Dr. Romulo also helped to advise the government through his evaluations of social policy relating to health. Both author’s areas of study are apparent in their methodology of studying governmental policy changes and the effectiveness of those changes on the policies’ goals of relieving conditions of poverty in Brasil.

The paper frequently mentions the idea  of the multidimensionality
of poverty. It argues that the welfare program Fome Zero could only be so successful because it was lacking the multidimensional aspect of poverty. By simply focusing on access to provided food and nutrition, the program does not provide a sustainable solution for the  conditions of poverty causing the hunger in the first place. The article uses Brasilian law and the analysis of policies to explain and support the authors’ arguments. An example of law they use to show some success in the flight against hunger in Brasil is “In 2010, amendment No. 64 to Brazil’s Constitution declared access
to food a social right” (1). So although this government support can be seen as a success for combating hunger, the article qualifies it by sharing the idea that these laws and welfare programs lack successful implementation causing their failure in creating sustainable solutions. The paper uses the measurements of improvements to government agendas for these welfare programs as its basis for evidence of progress in them. Using government policy as evidence clearly aligns with both authors’ areas of expertise, giving me confidence that there is intelligence behind their arguments. However, in my opinion Brasilian government policy  cannot provide an accurate representation of the actual degree of successful implementation of these social welfare programs. One of the paper’s concluding arguments is that the current welfare program being used to help fight poverty and indirectly hunger,  Brasil sem Mistéria like Fome Zero has had success in more rural areas where the programs are first targeted, but the success has not yet spread to poverty seen in urban areas (1).  The final point made about these two social programs in Brasil is that although they have had undeniable successes in helping to improve the lives of the impoverished, it is going to take a lot more than a supportive government policy being implemented to end conditions of poverty. Without society working just as hard as these programs to change the current situations of huger and poverty, they will be inevitable. 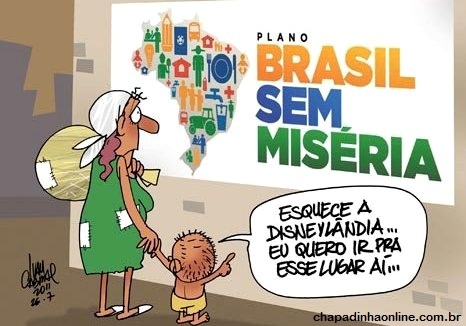