Above is a photo taken of a woman receiving her government issued card for Projecto Fome Zero. This is a very powerful, seemingly candid photo showing the significance of receiving the card bringing tears to the woman’s eyes. However, after watching the film “Quanto Vale, ou É por Quilo?”I am more skeptical to believe that this is a truly candid photo and not part of a staged photo shoot funded by the Fome Zero campaign. Either way the woman’s visible reaction to the card strengthens the idea of the card’s impact in the lives of the poor to the photo’s viewers. This photo also supports a common theme of subconscious racism found in Brasil. The person receiving the card, and in theory moving closer to success, also happens to be the person with the lightest color skin in the photo. The two black people in the photo are in small in the distance of the background insinuating their insignificance to the government, and separation from potential success. The most interesting aspect of this photo to me is how the face of one of the black people in the background is almost symbolically covered up by the government’s program card. This invisibility of identity can signify the unimportance of poor individuals to the government, and instead the importance of how their program and the bigger picture are viewed. Unlike audio and written sources, visual sources allow for loud implicit messages to be shared with its viewers through emotions seen, emotions evoked, and body language. At first glance, this photo appears to be a simple ad for a successful welfare intervention, but using the depth gained from its implicit messages this photo transforms into so much more showing the gaps in the government’s program to end hunger in Brasil. 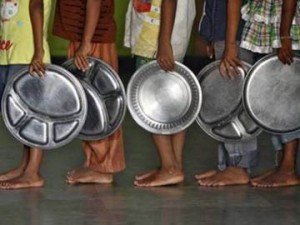 Hunger in Brasil:  a crisis in progress. On this blog I will discuss the causes, patterns, and solutions to this modern day problem.