Although last Sunday’s presidential debate was intended to be an open discussion about the concerns of all American citizens, one faction was clearly disillusioned by the discourse: Muslim-Americans. By the time Donald Trump had finished his response to a question regarding Islamophobia, Muslims had immediately taken to Twitter to express their disgust with the answer. 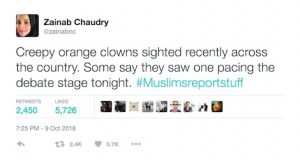 After being asked how he would combat Islamophobia, Donald Trump began by saying that Muslims needed to report “hatred” from other Muslim-Americans to prevent attacks like the one in San Bernadino. His enthymeme betrayed a clearly Islamophobic implication: even if Muslims themselves do not commit terrorist attacks, they are still to blame for terrorism because they know about terrorist plots and do not report suspicious activity.

This accusation is of course false, but it served to galvanize and humor the GOP base, which was Trump’s primary goal for the evening after he began losing republican support following his sexist comments to Billy Bush. Utilizing demagogic speech and painting all Muslims as terrorists allows Trump to claim that America has been losing, that it has been unsafe, and that it deserves change. Indeed, Trump has made this implication before and will likely continue with his demagogic challenger strategy in the future.

This typical challenger strategy was followed up with another challenger go-to. Trump finished his answer by going on the offensive and associating Obama’s performance in the area of counter-terrorism with Hillary Clinton, making the implication that another 4 years under Clinton will be another 4 years of failed policy and refusal to face the enemy. In this way, Trump attempted to position himself as the agent for change, though he clearly lacked the optimism typically associated with challenger campaign strategy.

Unfortunately for Trump, Muslim-Americans caught onto Trump’s enthymeme almost immediately. Many were frustrated that both candidates spoke about Muslims only in relation to foreign policy, while others ridiculed the notion that Muslims never report terrorism by starting the tongue-in-check hashtag, “Muslims Report Stuff.”

Ultimately, Trump’s statements alienated Muslims. But given his goal of strengthening his his own base in a time of desperation, he will likely continue to attack the integrity of Muslim-Americans in order to galvanize his own supporters and discourage them from leaving his camp in favor of the “weaker” and “less capable” Hillary Clinton.