Franken-Reading: or, the art of Medieval Composition, Mouvance, and Bricolage 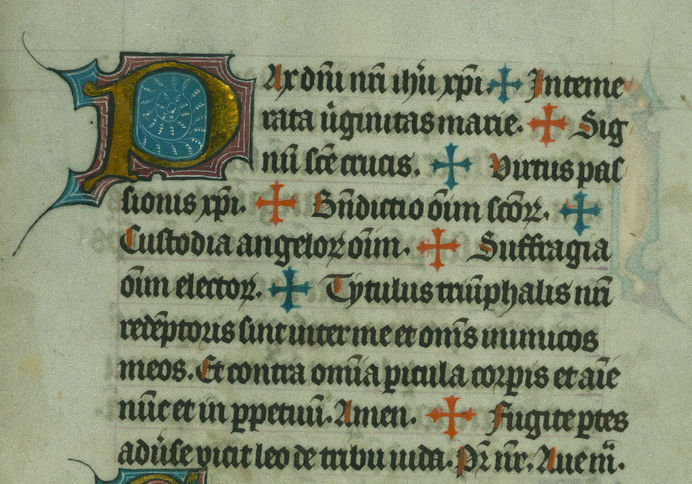 Note: This post was co-authored by Mikaela LaFave and Katharine Lech.

If you, our dear reader, have been following along, you’ll know that a group of us have been working on Baltimore, The Walters Art Museum, W.172, a Book of Hours that has been labeled for Use of Augustinian Canons of Windesheim Chapter. In her previous blog post, Emily has identified the history of the Windesheim Canons and specifically identified why W.172 seems to bypass typical devotion to the Virgin and rather focuses on Christ’s passion. Emily’s research answers the question of where in the world this book originated; what we seek to do is contextualize some of the lesser examined parts of this text.

Walters 172 contains most of the core texts expected in a Book of Hours – the Hours of the Virgin, Hours of the Cross, and Office of the Dead. However, where these objects really shine is in the accessory texts. Once you get past the popular secondary prayers—O Intemerata, The Last Seven Words of Christ, Anima Christi, etc, etc—there is a seemingly infinite number of prayers that can only really be identified by their incipit. Manuscript descriptions tend to skip over these smaller additional texts, focusing instead on decoration and the major texts, which seem to show these texts as objects of art history. In reality, these books have several accessory texts that directly exemplify textual instability. These texts serve as a metaphorical ground zero for a discussion of textual appropriation in how prayers are constructed during this time.

You can see the lack of description in the snippet of the manuscript description of W.172 found on the Digitized Walters website. The set of prayers we have been working with are labeled as “fols. 75r-v: Four prayers about the Passion.” Despite the brevity of the description, these four “prayers” have many more interesting things to teach us based on the compilation of texts that we have found. Therefore, our research question sought to expand upon these small lines in the textual description. What were these prayers – both in content and function?

These prayers follow the usual lack of authorship (as understood today) of medieval prayers. Often, the prayers in a manuscript like this are put together from other texts. Authorship becomes a matter of picking and choosing, of placement and reconfiguration, akin to our modern tradition of rewriting texts. Medieval studies have not seen much traction on the adaptation theory front, precisely because of the textual instability inherent in medieval writing. This instability is called mouvance, a term coined by Paul Zumthor to describe the general fluidity of medieval texts and explained excellently here by the University of Southampton. That is to say that medieval texts are not usually the intellectual property of one person alone. Zumthor describes how texts may be worked upon by other creators indefinitely, leading to a series of different “textual states.” Therefore, none of these states can be described as the authentic state (Millett).

Textual instability in smaller accessory prayers plays out on a smaller scale; in prior research, Katie has found that the body of a prayer tends to be stable, with the only considerable differences occurring in slight shifts of word order (which is generally inconsequential and does not change the meaning of a sentence, as it would in English) and the occasional switch in superlatives (such as beatissimam instead of sanctissimam). The order of prayers in sequence, or their placement among other larger texts in Books of Hours, tends not to alter the text. However, this brief set of prayers in W.172 strays significantly from the relatively stable instability of other accessory prayers; the first of four prayers on 75 recto and verso is not an altered version of a common prayer but, we believe, a set of prayers combined to create a new prayer.

The piecemeal structure of the first and second prayers is visible in the gradation of initials. The prayers begin with three and two line decorated initials respectively, marking them as separate units, with rubricated letters following each new verse after the sign of the cross. This structure, along with what we’ve been able to identify within the text, points to a significant variation that both functions within mouvance and moves past it; the instability afforded by medieval texts allows for the creation of a new prayer of sorts.

This change in how mouvance functions with Walters 172 leads to a consideration of appropriation, but in a roundabout way. The author is utilizing prior states of the text to create something new. Scholars have begun to use this framework to examine medieval texts: authors in Digital Humanities Quarterly cite scholar Monica Calma’s adoption of the term ‘bricolage’ to explain this phenomenon. Clearly, bricolage’s affinity for using works that were ‘at hand’ is akin to these prayer’s usage of liturgical and holy text that seems to fit the bid. Calma uses the term “to characterize medieval compositions that closely follow an (often unacknowledged) original, alternating verbatim copying with paraphrase, rearrangement, and additional comments” (Calma as cited by Zahora, Nikulin, Mews, and Squire).

This is best demonstrated in Prayers 1 and 2, both pictured here (Prayer 1 to the right and Prayer 2 below). Both of these “prayers” are, in the spirit of Halloween, “Franken-prayers.” Much in the same way Frankenstein’s monster is stitched together from stolen parts of humans, so these prayers are stitched together stolen parts of other prayers. Notice the crosses in between sections; in the same vein as Prayer 1, Prayer 2 instructs the reader or user to physically make the sign of the cross and does the work of breaking up the text for us. In this metaphor, these crosses are quite literal “stitches.” They bring together disparate originals and mend them into something new.

These two prayers in Walters 172 are both Passion specific lines from non-specifically Passion prayers and lines from Passion specific prayers that demonstrate a more intense devotion to the Passion. Douglas Kelly addresses this question of the intersection of textual instability with the process of composition in his chapter for Medieval Rhetoric, and notes that this Frankenstein’s monster nature of these prayers was the standard for prayers like this. [1] However, we should ask more than from where these prayer fragments originally come. Our Franken-prayer’s “Victor” also chose what to leave out of his compilation of prayers in the process of being a compilator, someone who gathers and records texts written by others (Minnis and Scott 229). [2] However, does the “new” prayer change the meaning of its sources through its new form and order, or does it retain the intention and meaning in each prayer it adopts?

For example, Prayer 2 begins with “cruci clauis corone spinee,” a specific list to the instruments of Christ’s torture. This seems to be attributed to a hymn, which crops up in a few different books: part of a Book of Hours in the Osborn Collection at Yale, and on folio 73v of the Burnet Psalter. In the Burnet Psalter, this hymn is included with other Passion devotions. Further on, the text transitions to another hymn for Holy Cross Day. While some of the rest captures typical, standard liturgical language, these cover the Passion as well. But, what are we leaving out? As we can see from the Passion hymn (Incipit: “Cruci clauis corone spinee”), it seems that these Canons took the Passion texts that directly spoke to Christ’s explicit torture, leaving behind prayers that were lukewarm in their devotion. Other liturgical language in this section recalls parts of the mass, or at least portions of prayers that were devoted to the Passion. By patching together these pieces of devotion, the author of these texts makes clear that the Windesheim Canons were explicitly devoted to the Passion. But, the structure of this patchwork also further intensifies the devotion of these Canons. Taking, for example, the hymn devoted to the instruments of Christ’s torture out of context, the image becomes much darker, and implies a heavier, more serious devotion.

Considering the instability of these textual accessories and the lack of clarity in how they were compiled, we close with questioning the simplistic use of the term “prayer” to describe these pieces of devotion within the manuscript description. The term “prayer” captures the function of these texts, but glosses over the vastly pieced together nature of the origination of these texts. The various incipits here refer to hymns, to actions, and to prayers and devotions. What should we call these then? We argue for calling these manuals or guides for piecing together your own devotion. Then, go through the motions to flip the switch and say “it’s alive!”

[1] “…first, the use of a source as model was taken for granted, and, second, that modification of the source or sources was also expected, whether such modification affected form, content, or context…third, the source was a multiple phenomenon, such that the ‘first author’ did not preclude ‘second’ or more authors, the authors of glosses and commentaries, or scribes producing variant versions, including a ‘new’ version.” (Kelly 13)

[2] This is one of Minnis and Scott’s four domains of medieval literary authority. The other three  include a scriptor, the scribe who writes others’ texts but does not compose; a commentator, who writes the work of others as well as their own, but only uses other texts to further prove or give authority to their own work; and an auctor, whose own work forms the core of the text but still writes and references the work of others (Minnis and Scott 229).

Kelly, Douglas. “The Medieval Art of Poetry and Prose: The Scope of Instruction and the Uses of