Is Apple Juice the New Coffee? 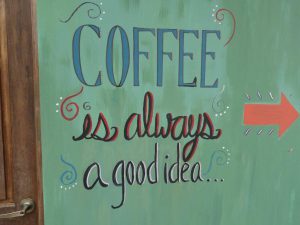 Coffee is the choice elixir of night owls, professionals, new moms and the sleep deprived alike. For some, it’s the sound of the bubbling water, for others it’s the aromatic, earthy smell that creeps through their morning-lit kitchens. Many will agree, though, that the appeal is the jolt of energy that quickly follows their morning cup of joe—thank you, caffeine.

Caffeine, found in coffee, energy drinks, soda and even chocolate, stimulates neurotransmission in the central nervous system (the noggin) to prevent the onset of drowsiness. This increase in communication between areas in the brain results in the caffeine “buzz” associated with coffee. However, an additional effect of caffeine is a narrowing of the blood vessels in the brain, causing a reduction in blood flow. This decrease in blood flow is an undesirable effect because adequate blood flow is associated with better brain function. Researchers hypothesize that coupling the stimulatory effects of caffeine with a strategy to increase blood flow will result in greater cognitive function. Dr. O’Connor at the University of Georgia aimed to test the effects of the brain stimulatory effect of caffeine coupled with the vessel dilating effects of polyphenols in apple juice1.

The experiment included placebo drinks, a caffeine control and apple juice “caffeine cocktails” with varying levels of caffeine. Researchers investigated their effects on motivation, sustained attention and reaction time. In the lab, participant’s tasks were quite tedious number identification exercises, but in a real life scenario, these measurements can translate to:

Should you guzzle the coffee for the caffeine, or “spiked” apple juice for the additional polyphenolic effects? More research is needed to say with certainty but this new evidence is quite exciting. Practitioners can add this “cognitive” piece of the caffeine puzzle to the extensive research on coffee and caffeinated beverages. Most importantly, and not covered in Dr. O’Connor’s talk, is the safety of caffeine. According to the Dietary Guidelines for Americans, up to 400 mg of caffeine can be incorporated into healthy eating patterns(3) This may be the sweet spot for those desiring the cognitive benefits of coffee while still balancing a healthy lifestyle. Dr. O’Connor made one point clear, that “caffeine effects how you feel as much as it affects how you perform”. Coffee drinkers, unite, and celebrate over your favorite (cold) brew.