Geoffrey Chaucer: The Man Behind the Canterbury Tales 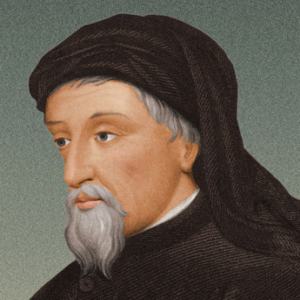 The name ‘Chaucer’ is synonymous with articles such as romance, humor, and poetic prowess. He has written several masterful works; however, his most entertaining and powerful piece came in the form of 24 tales told by travelers on their way to Canterbury, England. Even though it was never finished, The Canterbury Tales is considered one of the most influential and magnificent pieces of English literature ever. The man behind the stories is even more interesting than the stories themselves, as Chaucer led a colorful life and touched the hearts of many with his work.

Chaucer was born around 1340, in London, England. His family was wealthy, and he lived a comfortable early life, possibly attending school at St. Paul’s Cathedral School. Living a cushy life, Chaucer was most likely exposed to upper-level literature at a young age, and he developed a passion for writing early on. As a young man, Chaucer fought in the Hundred Years’ War, and he was captured and held for ransom. Luckily, the poet had some powerful connections, and he was able to obtain his freedom and become a diplomat for the Royal Service. Around this time, Chaucer married Phillipe Roet. Through Phillipe, Chaucer’s court career grew with her success. On diplomatic missions, Chaucer became acquainted with works from Dante and other famous writers. However, Chaucer was quite busy with all of his court responsibilities, and he was unable to focus on his writing career. After Phillipe died in 1387, Chaucer lost most of his income and was forced to go back to living a lower-middle class life. Despite this setback, our beloved author’s life was about to take a turn for the best 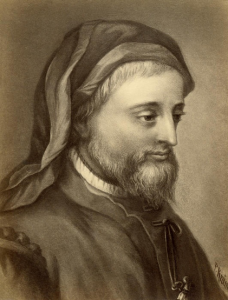 Chaucer’s work career became quite tumultuous after Phillipe died. He held several jobs, including Clerk of the Works and a sub-forester in a garden. Richard II had been paying Chaucer a pension, but that fund had run dry, leaving Chaucer poorer than before. Finally, after the deposition of Richard II, Henry IV reinstated Chaucer’s pension. After this, Chaucer was finally able to live a comfortable life at St. Mary’s Chapel in Westminster.

It is clear that Chaucer’s work was influenced by his bouts of poverty, as many of his characters are not well-to-do. His major works include Parliament of Fouls, Troilus and Criseyde, The Legend of Good Women, and others. The former was an allegorical piece, the middle a Trojan War poem, and the latter an unfinished poem containing short narratives. His most widely popular and produced piece, however, is The Canterbury Tales. The story about the caravan to Canterbury contained 24 tales, 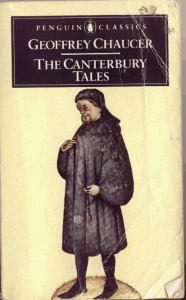 but Chaucer really wanted each character to tell four stories each, adding up to a whopping 120 stories! Even though he never completed his goal, Chaucer gave readers a marvelous tale of tales combining some of the greatest characters and storytelling elements in English history. What makes the piece even more outstanding is that it was meant for the common folk as well as nobility, and it drew much popularity from all social and economic circles. When we look back on the life of Geoffrey Chaucer, we can see where he drew inspiration as he spun his tales with satirical prowess and rich storytelling dynamics. The Canterbury Tales remains a quality read for reader enthusiasts and students alike to this day, thanks to the poet behind the pen.