The History of Enclosure in England 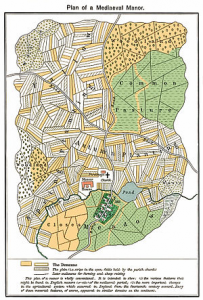 A long time ago, agricultural practices in England had a more altruistic and laid-back form than the privatized and corporatized beast that agriculture has transformed into in England and globally. Land was public under the common-field system, where property was divided by patches of uncut grass that informally set divisions for owners when it came time to plant crops and harvest, but generally shepherds could come through land as they pleased allowing their herds to graze freely. Open Field systems were a version of feudalism in which land was given by Lords of villages to peasants to work upon, areas of land were designated for growing crops while other plots of land were designated for common grazing, and by extension these grazing lands were public. The Open Field System placed large emphasis on the communal goods and equal distribution; a crop rotation system ensured that no farmer received a better plot of land than another, and theoretically since everyone worked the land, everyone had claims upon the food produced and the resources available.

The Failure of an Age Old System

Often, the open field system is referenced as an example of the theory of the Tragedy of the Commons, because as time passed and populations grew, the land became increasingly occupied, increasingly worked upon, and as a result increasingly unusable.

Enclosure in the Co 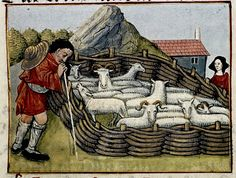 Around the 12th century, landowners ceased to benefit from the open field system, the system was unsustainable and unprofitable for them, so the beginning of a several century long upheaval of public land began to take place as smaller plots of land were consolidated into a larger plot of land with a single holding. Soon, the process of ‘enclosure’ would begin as fields became over-farmed and less and less suitable for growing crops while a market for wool grew with an increased reach of trade during the 14th and 15th centuries. Landowners and lords found that through fencing off lands and turning them into privately owned sheep pastures. The enclosures of public land essentially forced the serfs and peasants off of lands they once lived and worked on. This eviction of the common people can mark a shift in the values of English society from one that operated on communal ideals towards a dominant society that valued profit of the individual over the profit of a village.

The Bitter Push of Progress 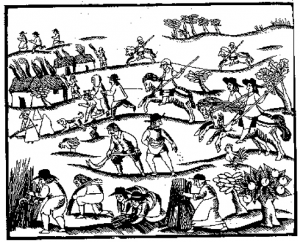 The Agricultural revolution and enclosure go hand in hand in the history of England. As farming tools that were invented that simplified farming or decreased the number of farm workers necessary, those people who depended upon the functions of the old systems and ways would be uprooted, sent away from the land, and left impoverished  by a system that would solely benefit those with enough money to fence off and own their own lands. The movement towards enclosure could be viewed as the creation of ‘the poor’ in England because it undid the feudalism that allotted predetermined roles for Lords and peasants, whereas peasants’ displacement left them without a specific role in society.

Acts of Enclosure to Actively Exclude

In the 1600’s, enclosure began to be legislated. Parliament legitimized the previously informal acts of enclosure through a series of Acts that spanned 1604 to 1914. Public outrage from small-time landowners and non-land-owning laborers swelled during the passing of enclosure acts, because they had to submit to banishment from lands they could no longer afford to own in the face of powerful or noble landowners or were no longer permitted to work upon. A large portion of society became disenfranchised by those with more power and means. To the common man, enclosure meant the advancement of the rich and further subjugation of the poor. 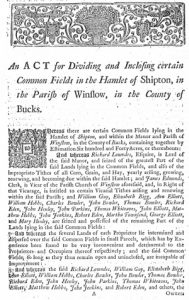 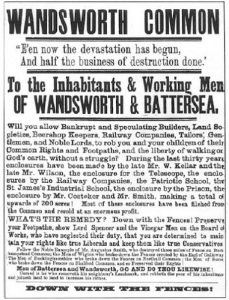 The movement towards enclosure holds historic and philosophic importance 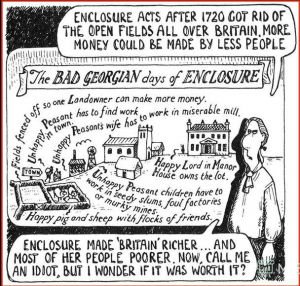 . Enclosure shaped the economy in England today, the displacement of the poor from rural areas lead to a mass movement of poor to urban areas, spurring the Industrial revolution as a working class people developed. The act of enclosure holds significant meaning to the definition of culture and society within England. People were literally fenced out from s way of life they had been accustomed to for centuries and forced to adapt under a new culture that approached progress much more selfishly. The Enclosure Acts would serve as a cause for disquiet in society for hundreds of years, its criticism can be seen in works from the 14th century in Wakefield’s  Second Shepherd’s Play and criticisms remain in works from the 2oth century. The comparison between Enclosure and the Open Field System are often used in arguments for economic-political systems, the movement of Enclosure exhibiting traits and similarities to the movements of capitalism while the communal aspect of the Open Field System can be compared to Marxist ideas for communism. Supporters of either side point to the failings of the other system in support of their political ideals. In the 17th century, an anonymously penned poem criticizes enclosure stating “The law locks up the man or woman/Who steals the goose off the common/But leaves the greater villain loose/Who steals the common from the goose.” Ultimately, the enclosure movement can be reduced to a division between rich and poor in society, they are a significant example of the times when progress and industrialization sacrificed the common good, entrenching a class system that would still present problems more 700 years after its institution.

The Enclosures in England and Economic Reconstruction

A Short History of Enclosure in Britain