you know, Donald Trump was elected as the new 2016 President Tuesday night, November 8th or should I say early morning Wednesday. His concession speech was actually written very well and stated exactly what the American people needed to hear, “It is time. I pledge to every citizen of our land that I will be President for all of Americans, and this is so important to me…I’m reaching out to you for your guidance and your help so that we can work together and unify our great country.” He needed to bring the American people together of all backgrounds together and unify the country. But do all American people feel unified and able to accept the election results?

The Sun reports,“Police said at least 500 people swarmed on streets in and around UCLA, some shouting ‘f**k Trump’ and others chanting “Not my president!” It was even reported that people from downtown Portland were burning an American Flag. 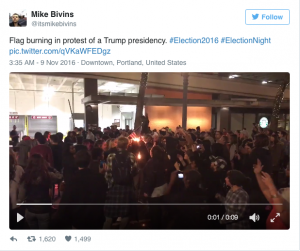 Anti-Trump rallies were also happening in downtown Athens, GA. A UGA student stated: “I’m just here to stand up for who I am as a person just because Trump has degraded females, hispanics and immigrants and I fall into all three of those categories among many other categories of people that he’s degraded who I would like to stand up for,” 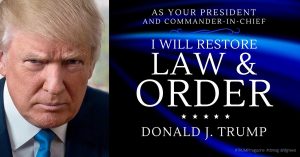 With all of these rallies happening, how will Trump use  his “law and order” rhetoric to protect the police and stop them? Will he give more power to the police in such cases like these? It will be interesting to find out as time will tell.